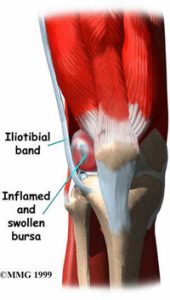 This outside or lateral knee pain is caused by the ITB pulling up on it’s insertion on the outside of the knee. Underneath the ITB near it’s insertion at the knee is a bursa. Bursae are fluid filled sacs that lubricate areas where rubbing and friction occur. When that ITB is pulled tight it put too much pressure on the bursa and that bursa reacted by becoming inflamed and swollen, giving you pain.

The ITB is being pulled tight by one of two muscles – the TFL or the Gluteus Maximus. Running up hills, for example, uses more of the glutes than running on flat ground, therefore it will often trigger a bout of ITB pain. That also explains why the pain is often aggravated by hill repeats. The ITB can also be aggravated by running on uneven roads or on tight indoor tracks, running in poor running shoes or if your foot pronates (arch collapses).

There are two main causes of knee pain associated with iliotibial band syndrome. The first is “overload” and the second is “biomechanical errors.”

Overload is common with sports that require a lot of running or weight bearing activity. This is why ITB is commonly a runner’s injury. When the tensor fasciae latae muscle and iliotibial band become fatigued and overloaded, they lose their ability to adequately stabilize the entire leg. This in-turn places stress on the knee joint, which results in pain and damage to the structures that make up the knee joint.

Overload on the ITB can be caused by a number of things. They include:

Custom made foot orthotics can help accomodate pronated feet and reduce the abnormal amounts of rotational forces placed on the knee joint and it’s surrounding structures. Talk to our Pedorthists, Athletic Therapists and Personal Fitness Trainers about stretches or braces that can help provide relief from ITB pain.